Comparison between nanodisc and liposome fusion

Lipid exchange occurs between membranes during fusion or active lipid transfer. These processes are necessary in vivo for the homeostasis of the cell at the level of the membranes, the organelles and the cell itself. They are also used by the cell to interact with the surrounding medium. Several assays have been developed to characterize in vitro these processes on model systems. The most common one, relying on fluorescence dequenching, measures lipid mixing between small membranes such as liposomes or nanodiscs in bulk. Usually, relative comparisons of the rate of lipid exchange are made between measurements performed in parallel. In this study, we establish a quantitative standardization of this assay to avoid any bias resulting from the temperatures, the chosen fluorescent lipid fractions and from the various detergents used to normalize the measurements. We used this standardization to quantitatively compare the efficiency of SNARE-induced fusion in liposome-liposome and liposome-nanodisc configurations having similar collision frequency. We found that the initial yield of fusion is comparable in both cases, 1 per 2–3 million collisions in spite of a much larger dequenching signal with nanodiscs. Also, the long-term actual fusion rate is slightly lower with nanodiscs than in the liposome-liposome assay. This was published in Scientific Reports 2017. 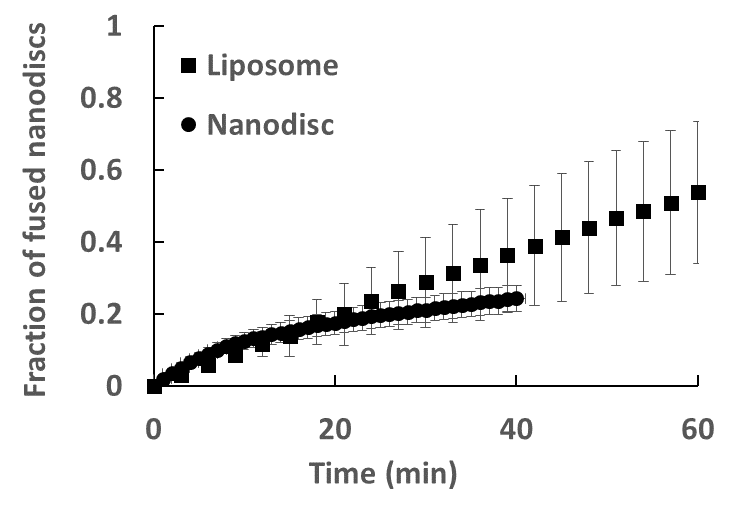 Quantitative comparison of liposome-liposome and liposome-nanodisc SNARE-induced fusion. The fraction of v-liposomes or v-nanodiscs that underwent fusion are presented. Error bars are standard deviations on 5 different experiments.