SNARE complexes are the core molecular machinery of membrane fusion, a fundamental process that drives inter- and intracellular communication and traﬃcking. One of the questions that remains controversial has been whether and how SNAREs cooperate. In this study, we showed the use of self-assembled DNA-nanostructure rings to template uniform-sized small unilamellar vesicles containing predetermined maximal number of externally facing SNAREs to study the membrane-fusion process. We also incorporated lipid-conjugated complementary ssDNA as tethers into vesicle and target membranes, which enabled bypass of the rate-limiting docking step of fusion reactions and allowed direct observation of individual membrane-fusion events at SNARE densities as low as one pair per vesicle. With this platform, we conﬁrmed at the single event level that, after docking of the templated-SUVs to supported lipid bilayers (SBL), one to two pairs of SNAREs are suﬃcient to drive fast lipid mixing. Modularity and programmability of this platform makes it readily amenable to studying more complicated systems where auxiliary proteins are involved. This work was published in JACS, 2016. 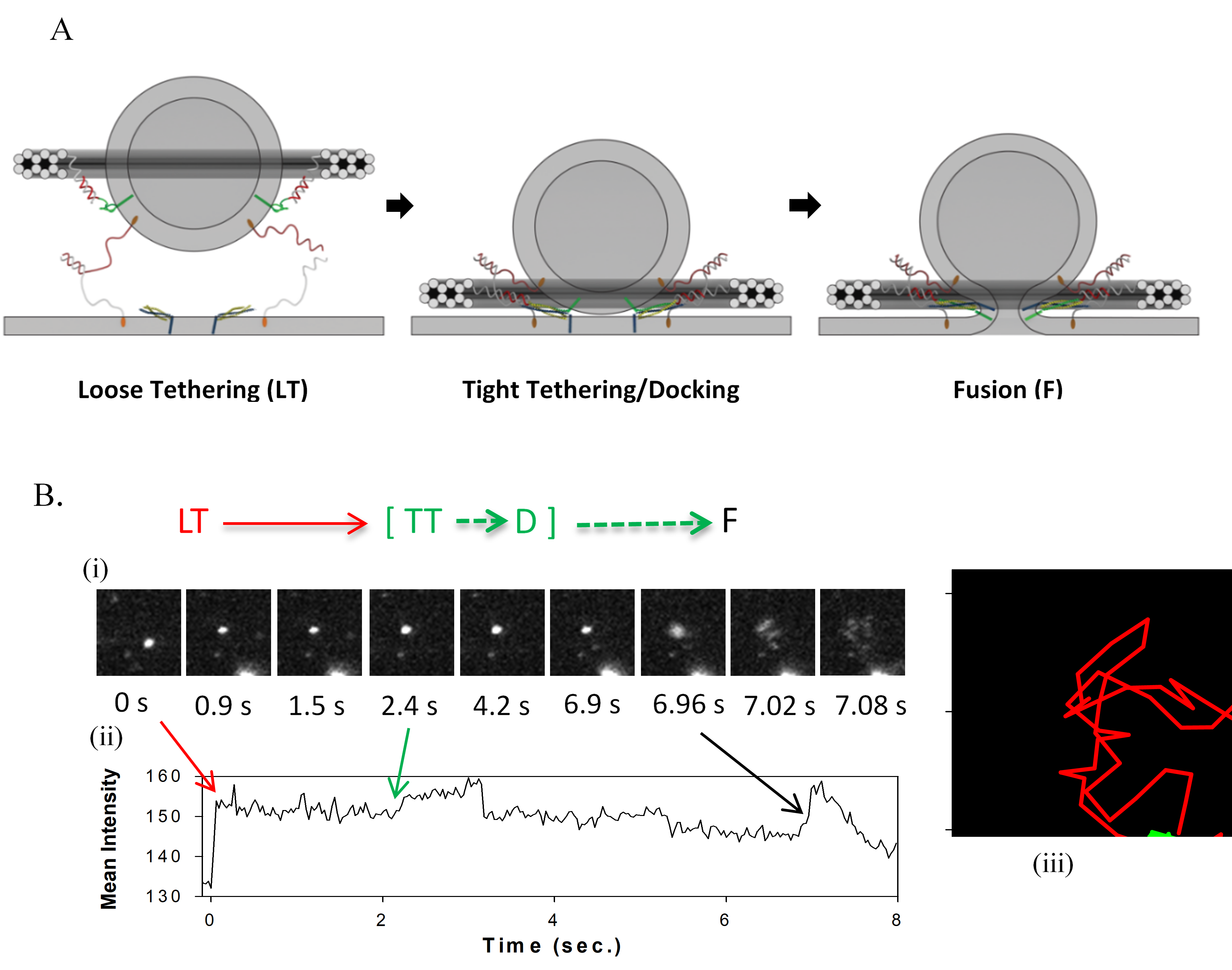 Templated SUVs fused with SBL after capture mediated by tether pairings. (A) Cartoon illustrating the transition from the Loosely Tethered (LT) stage, to the Tightly Tethered/Docked (TT/D) stage, and to the Fusion (F) stage. For clarity, only t-SNARE and the t-tethers facing upward are shown. Color codes: Blue, Syntaxin 1; Yellow, SNAP25; Light grey curls, t-tethers. (B) An example of fusion event, in which a vesicle was observed to undergo an LT to TT to F transition sequence. (i) Image series during measurement (11 μm × 11 μm area). (ii) Mean intensity time course of the area (5 μm × 4 μm area exclude other particles). (iii) 2D diffusion traces of the observed vesicle (5 μm × 4 μm area). The vesicle (bright spot) was first captured onto the SBL by tether pairings (noted as entry into the LT state, at time 0 s in (i) and (ii)); then the vesicle diffused on the bilayer (red trace in (iii)) until it was tightly tethered and immobile on the SBL (noted as entry into the TT state, at 2.4 s in (i) and (ii)); after v- and t-SNARE docking (noted as entry into the D state), certain fractions of the populations of these immobile vesicles proceeded to fusion (noted as entry into the F state, at about 6.9 s in (i) and (ii) ) while others remained immobilized until they became invisible due to photobleaching. Note that at the moment of immobilization (i.e. entry into the TT state), a characteristic intensity step-increase was observed, indicating the vesicle was pulled closer to the SBL.